The wait has finally come to an end: The opening of the newest exhibit at The Children’s Museum of Indianapolis, Beyond Spaceship Earth, has arrived.

Indy’s Child received an exclusive sneak peek of the exhibit prior to the public opening on June 25th, but before we get into those photos, let’s wrap up the information for our third of this 3-part series! Beyond Spaceship Earth is a massive exhibit. In fact, it’s really three exhibits in one. In part one of our series we detailed the re-creation of the International Space Station where kids can play STEM-based games and perform the same jobs real astronauts do aboard the ISS. In part two we explored the Indiana Astronaut Wall of Fame, which showcases more than 30 astronauts and NASA engineers with ties to Indiana.

The Liberty Bell 7 was the Mercury capsule that NASA astronaut and Indiana native Virgil {Gus} Grissom flew in 1961. The capsule was launched into space on July 21, 1961. Grissom’s flight, a fifteen minute sub-orbital trip, was the second American space flight at that time. The Liberty Bell 7 was recovered from the Atlantic Ocean in 1999 and is currently on loan to the museum for this exhibit.

Grissom flew the space capsule Liberty Bell 7 in the second manned launch of NASA’s Project Mercury. It was a sub-orbital, 15-minute flight which Grissom’s nephew told us back in March required the astronaut to board the capsule in a less-than-glamourous manner: “He went in with a shoehorn and planned to go out with a can opener!”

The Planetarium features an incredible film highlighting Grissom’s flight, the history of the Mercury-Redstone program and the daring rescue required to save Grissom from the turbulent Atlantic Ocean following his flight. But most notably – perhaps because the history lesson has been lost on so many of our youth – is President John F. Kennedy’s powerful speech on space exploration given at Rice University back in 1962. JFK was nominated an honorary visiting professor and as a the Liberty Bell 7 served as a cornerstone to the growing American space program, JFK delivered this:

I am delighted that this university is playing a part in putting a man on the moon as part of a great national effort of the United States of America.

Many years ago the great British explorer George Mallory, who was to die on Mount Everest, was asked why did he want to climb it. He said, “Because it is there.”

Well, space is there, and we’re going to climb it, and the moon and the planets are there, and new hopes for knowledge and peace are there. And, therefore, as we set sail we ask God’s blessing on the most hazardous and dangerous and greatest adventure on which man has ever embarked.

Well friends, you may not have the opportunity to visit the moon. But you do have one to visit the Children’s Museum and really discover life Beyond Spaceship Earth. And so you should.

Last night’s sneak preview of the exhibit was attended by four of our IC Insiders, who ‘grammed, tweeted and FB’ed enough photos to fill an album and your curiosity until you’re able to visit the new exhibit for yourself. Take a peek: 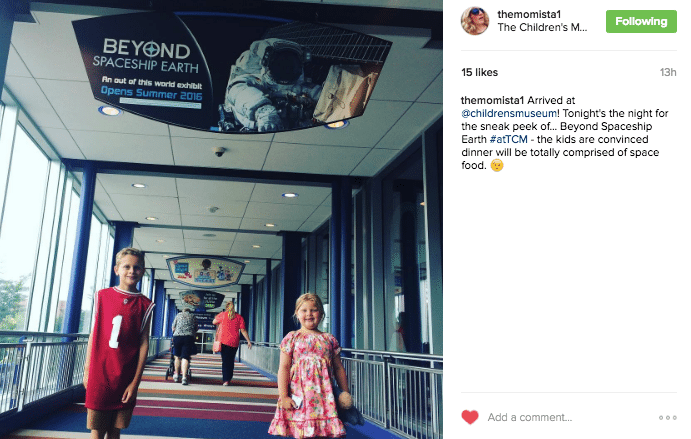 SPEAKING OF ASTRONAUTS: Did you catch the details on the Astronaut Wall of Fame in the Beyond Spaceship Earth exhibit? They’re pretty fantastic.