Beauty and Tradition in “Fiddler on the Roof” at Civic Theatre

After a long, busy week, I was really looking forward to relaxing in my seat in the Booth Tarkington Civic Theatre last night to watch many friends on stage in “Fiddler on the Roof.”

My 5-year-old daughter – Daisy May – was along for the ride. I knew this show includes some slower, sensitive and dramatic moments that might be a little challenging for her attention span. But I also knew it would have plenty of the gorgeous music, dancing and stage magic that she loves. People often ask if she has the theatre bug like her older sister and I do. So far, she loves watching shows. But when asked if she wants to be up on stage herself, she says she’s worried she’d be “too scared.”

From the opening number “Tradition,” Daisy had her hands up above her ears, snapping along with the cast in rhythm. I knew that was a good sign. Then she noticed a little girl we know, Nya Beck (below), step onto the stage with the ensemble. (Nya’s mother, Ann, choreographed the show, and did a fabulous job, by the way!) Daisy was transfixed by this new role model – a little girl just barely older than her, helping paint the beautiful picture of 1905 Anatevka, a small village in Russia where proud Jewish family patriarch, Tevye, lives with wife Golde and five daughters. The rest of the show for Daisy became a game of “Where’s Nya?” It was so much fun to see my daughter’s eyes glued to this talented little girl every time she stepped on stage.

“What if I don’t know what to do?” she asked nervously.

“People will show you!” I reassured her. “You would never be all alone up there.”

Daisy also became a big fan of Tobin Strader (Tevye), who brought nice depth and reality to the iconic role without letting it become a caricature. Marni Lemons as his wife Golde nailed the comedic timing and dry wit her role demands, and also allowed Golde’s emotional sensitivity to show from behind a stern, intimidating exterior. (Not easy – nice work!)

RELATED: Stay up to speed with all of Trisha’s performing arts reviews on her special Indy’s Child blog, “Trisha’s Wishes”

The acrobatic dancers also merited some eye-popping, jaw-dropping reactions: The dream scene included a hair-raising appearance by spooky Fruma-Sarah (Carrie Neal) floating high above the stage, and the three older daughters each told their stories convincingly. (The famous “Matchmaker” gives me plenty of pause as a mother – goodness knows what my children will look for in their perfect match someday might be a lot different from what I would choose for them!) Daniela Pretorius as Chava (with whom I had the pleasure of sharing the stage in Civic Theatre’s “Wizard of Oz”) not only did a beautiful job dancing and singing, she earns extra points for bringing tears to my eyes with her heartbreaking cry as her father turns his back on her due to her choice of husband: “Papa!” OUCH. Beautifully done, my friend.

Speaking of beautiful – the orchestra – wow!! (Nice work, conductor Brent Marty and musicians!) The young lady who played The Fiddler stole everyone’s heart. At age 14, Erin Jeffrey is not only an experienced dancer and actress, but also concertmaster for the Metropolitan youth Orchestra, the Butler Youth Orchestra, and the MYO Chamber Group. 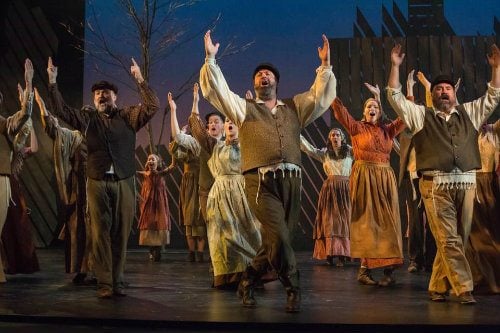 By the end of the show, my “date” was very, very tired, but she wanted to wait in the lobby to meet the “star” of the show. (Nya Beck, of course.) We congratulated our little friend and her mother, and watched her accept flowers from loved ones celebrating her first musical.

As we pulled out of the parking lot, I heard my sleepy daughter whisper some magical words.

That’s a family tradition I can wholeheartedly embrace.

MORE INFO: “Fiddler on the Roof” runs through May 7 at the Booth Tarkington Civic Theatre in Carmel, which is part of the Center for the Performing Arts. Performances are Thursdays, Fridays & Saturdays at 7pm, last Saturday (5/7) at 5pm, Sundays at 2pm. Tickets: $43 Adult, $20 Students. Visit CivicTheatre.org for tickets and more details.

50 Fun Activities for $5 or Less in Indianapolis