Grab a ticket and hop aboard a stationary version of Dinosaur Train this month at The Children’s Museum of Indianapolis.

When does the Dinosaur Train open at The Children’s Museum of Indianapolis?

Dinosaur Train: The Traveling Exhibit opens January 28 at The Children’s Museum of Indianapolis, and will be at the museum through July 30. Based on the popular PBS KIDS TV series, Dinosaur Train

As an adopted kid in a mixed-species family, Buddy the Tyrannosaurus rex and his Pteranodon family is curious about the differences between species. So, he wants to discover as much as he can about all kinds of dinosaurs by riding a train and learning dinosaur facts from the train’s conductor. Based on the popular PBS KIDS TV series, Dinosaur Train, families explore the basics of science through fun, hands-on activities. Time travel to the Triassic, Jurassic and Cretaceous periods of the Mesozoic Era and complete the Nature Trackers’ Scavenger Hunt. Along the way, little ones will learn basic math concepts by exploring the different sizes and measurements of dinosaurs, analyzing dinosaur fossils and learning the difference between herbivores, carnivores and omnivores. The museum hopes this experience, which focuses on younger children, will serve as a catalyst to spark a lifelong interest in dinosaurs, science and natural history, just as the Dinosphere exhibit does. 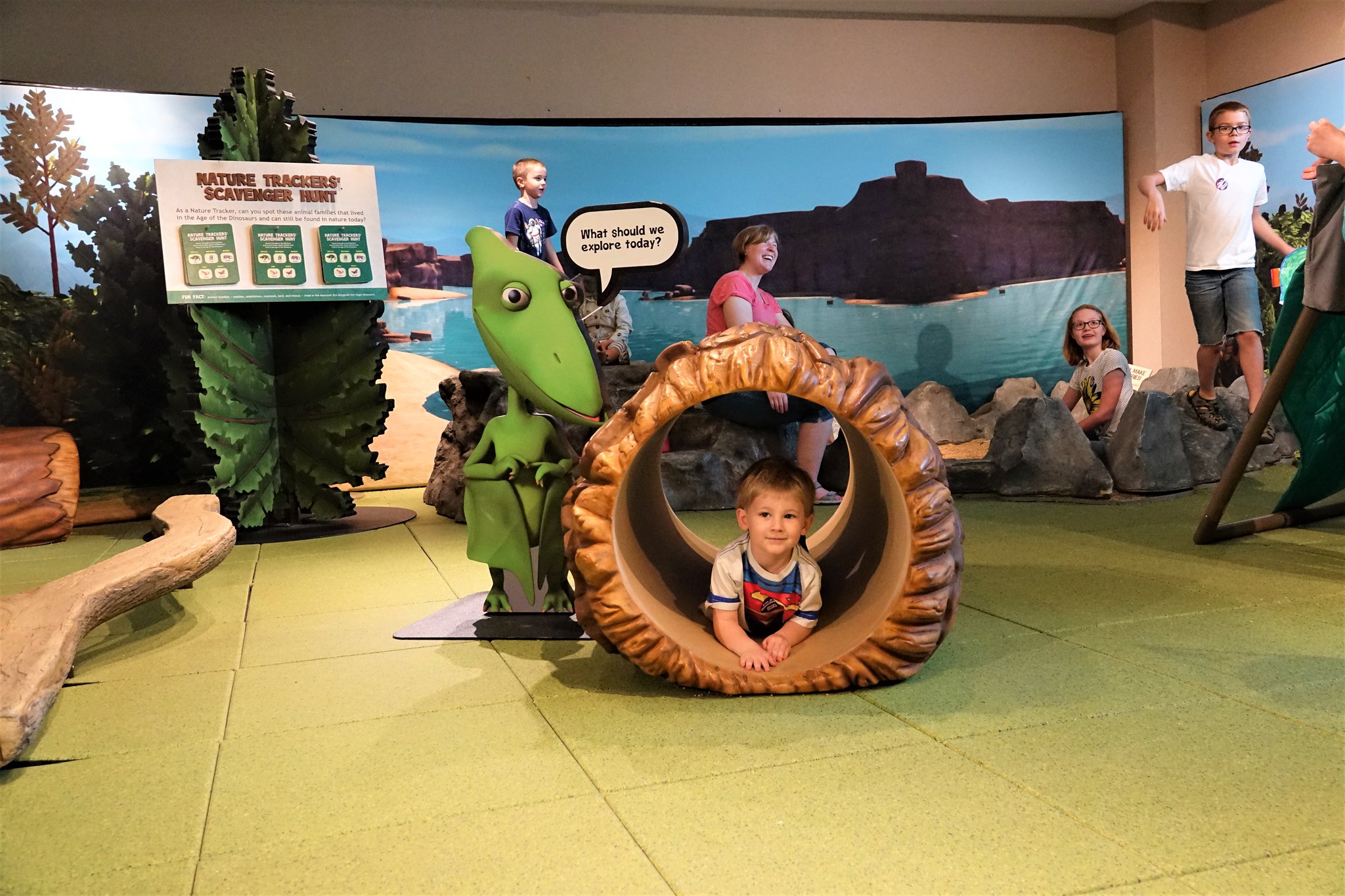 “The exhibit celebrates the fascination kids have with both dinosaurs and trains,” says Lauren Wesley, exhibit project manager for The Children’s Museum of Indianapolis. “Our paleo staff loves Dinosaur Train because it presents current science in a way that’s fun and engaging for preschoolers. The exhibit encourages kids to make observations and ask questions about the world around them, just like a paleontologist would.”

Kids snuggle up with their grown-ups on a soft leaf-shaped pillow within the exhibit to read “Dinosaur Train” books and pose for photos with Mrs. Pteranodon. Families can watch a video and learn how a steam engine works, pull the cord of the train’s whistle to alert passengers that the train is leaving the station and play a hands-on “Dinosaur Train” board game. In the Junior Conductor Academy, tap a letter of the “Dinosaurs A to Z” interactive to flip the screen and see and hear 26 dinosaur names. Visitors can also compare the size of their femurs (leg bones) to that of an Apatosaurus, feed three dinosaurs based on their different diets and make footprint impressions by pressing fossil stones into clay.

See real fossils in the Dinosphere

After that adventure, families are invited to see real fossils in Dinosphere and encouraged to ask their kiddos to reflect on what they learned in Dinosaur Train by picking out the herbivores and carnivores and sharing facts about them. They can even touch real fossils at the Polly Horton Hix Paleo Prep Lab while asking real paleontologists questions. Dinosaur Train: The Traveling Exhibit opens January 28 at The Children’s Museum of Indianapolis, and will be at the museum through July 30.