All aboard, train lovers! There is a hotel in Indianapolis where you can sleep in a real train car, located right in downtown Indy!

Related Article: 22 Things To Do In Indy This Spring Break

Thirteen real train cars have been converted into hotel rooms, and when you check-in, you’ll find out if you’ll be sleeping on the blue line, the green line, or the red line. The train cars even sit on a real train track! All cars are named after famous early- to mid-20th century people, including Charlie Chaplin, Jean Harlow, Winston Churchill, and Amelia Earhart, to name a few. Our family was given a room on the green line, and our hotel room was named after P.T. Barnum, the American showman who founded Barnum & Bailey Circus in the 1800s. Our room seemed appropriate for us: With two young and active boys in tow, life certainly felt like a circus sometimes! 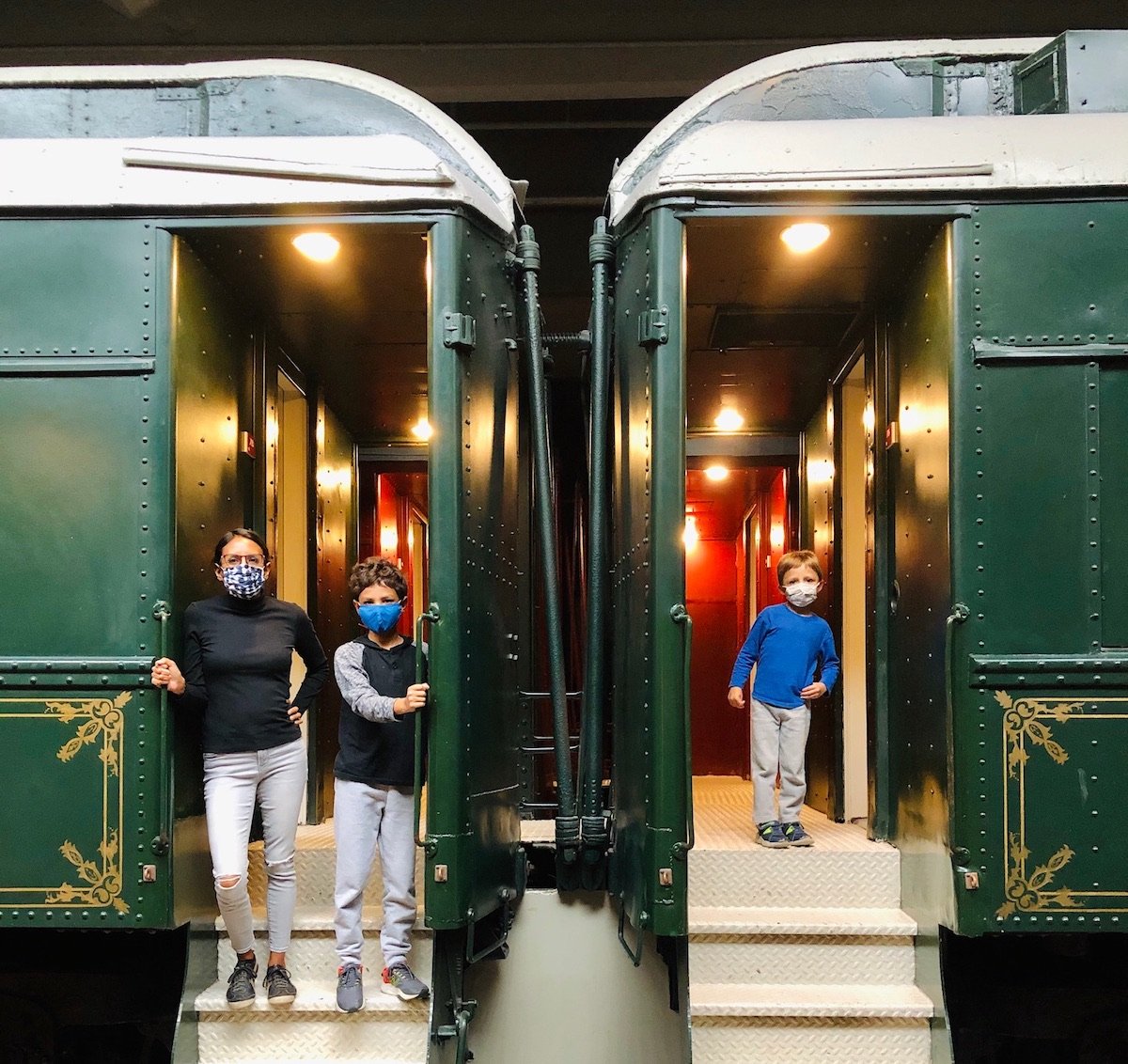 Inside the Train Hotel Rooms

Inside the train car, we found a cozy and streamlined hotel room. Because the room is inside a real train car, the room is more rectangular than a typical hotel room, with several windows lining one wall. You can request a Pullman Train Room with either two double beds or a room with one king bed. Our family of four had more than enough room with our double-bed room. 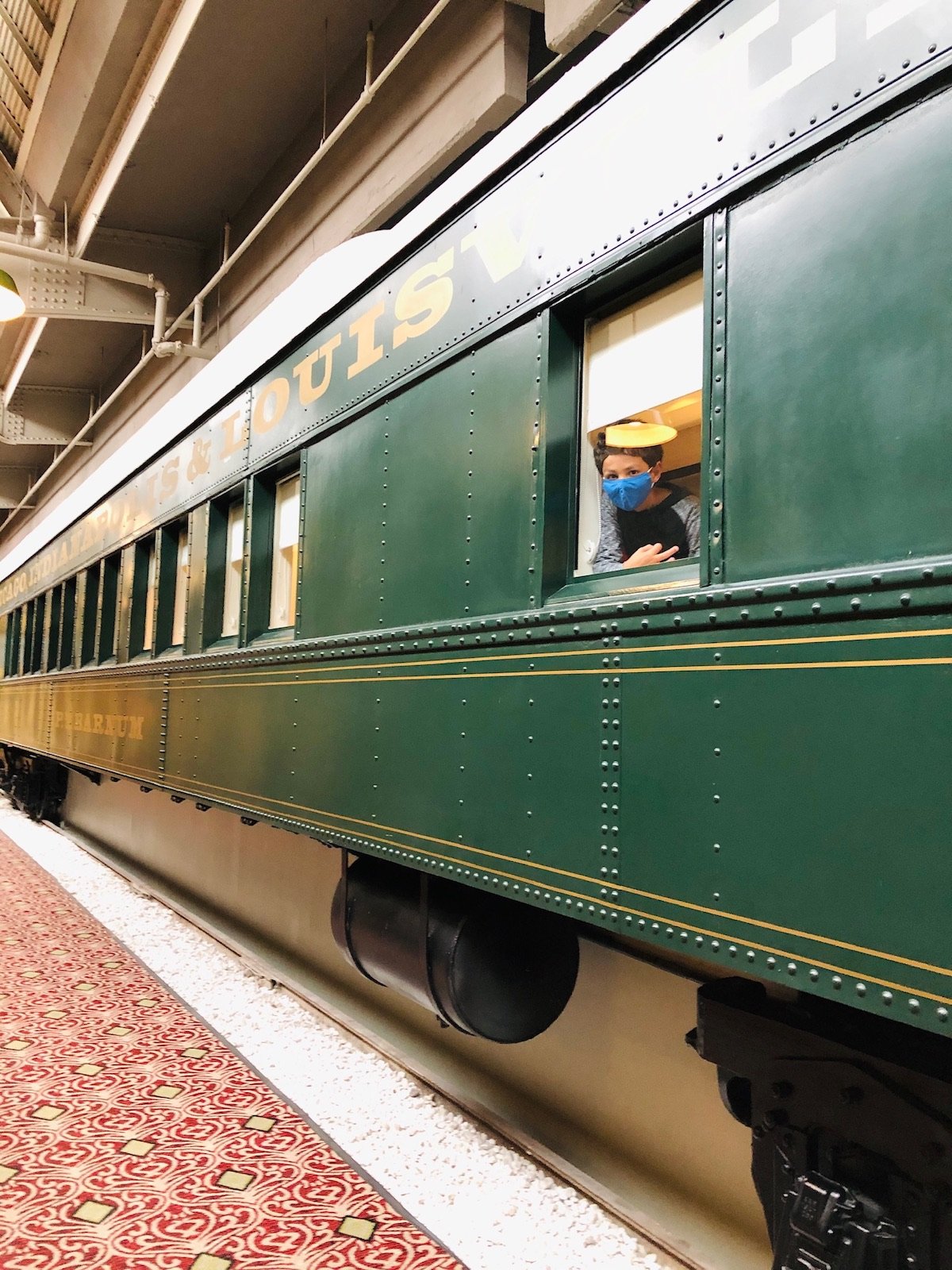 Union Station is a real working train station, so when we checked in, the attendant told us we might feel the vibrations of trains passing by. And we did! It wasn’t disruptive at all, and honestly, if we weren’t trying to notice it, we might not have. But the gentle rumbling that happened every so often just added to the ambiance of sleeping in a real train car. 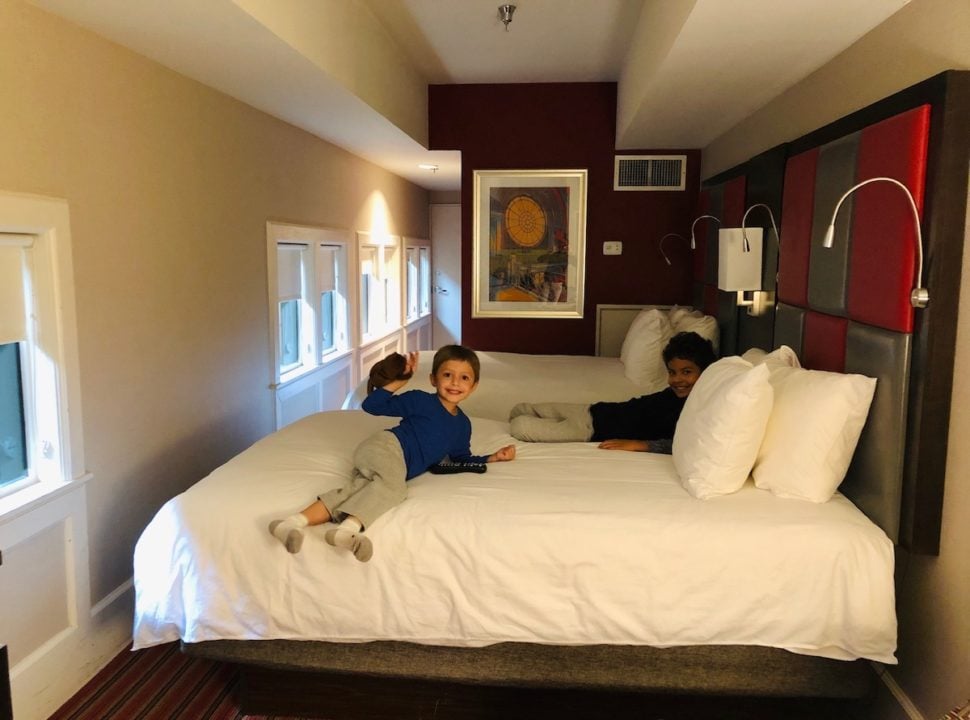 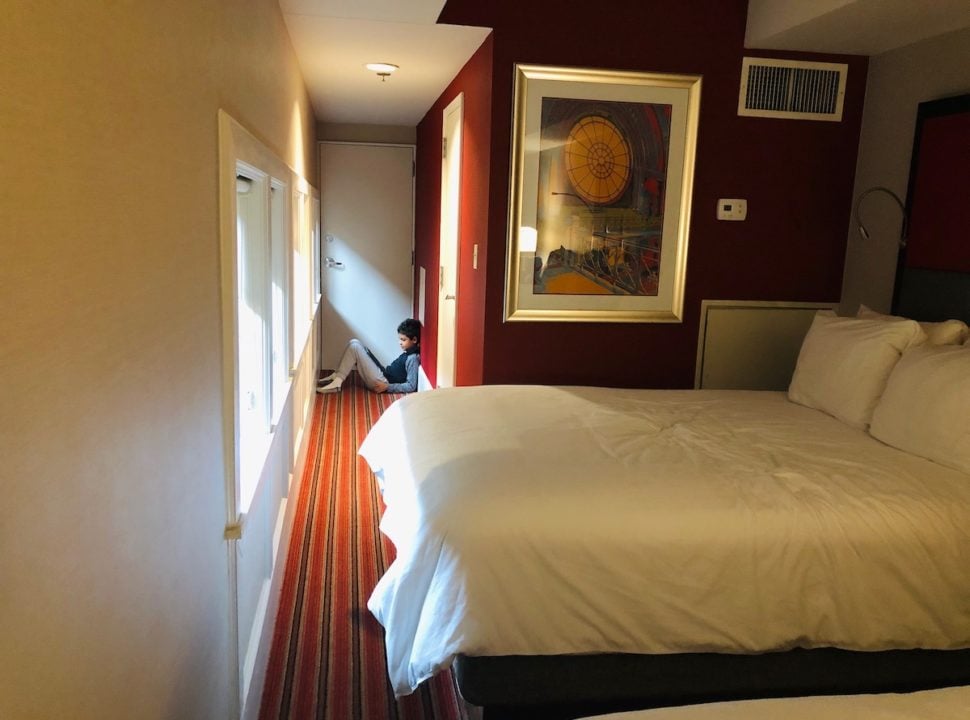 Letting Off Steam at the Hotel

The Crowne Plaza Hotel has a pool inside the hotel, but when our family visited, the pool was closed due to COVID-19 restrictions. But we didn’t let that little detail derail our fun! We trekked around the hotel in search of the “ghosts” that were located throughout all three stories of the hotel: 28 life-sized, white statues that pay homage to the history of the hotel and Union Station. We spotted flapper girls, nuns, shoe-shiners, and even a trio of boys trying to hitch a ride on a train. We also walked around Union Station and learned about its long and storied history. Built in 1888, Union Station has seen many famous people travel through the station during its years, including presidents Theodore Roosevelt, Woodrow Wilson, Franklin D. Roosevelt, Harry Truman, and Dwight D. Eisenhower. Abraham Lincoln passed through Union Station twice: once when he was giving his famous inaugural address in Washington D.C., and lastly on his way to lie in state after his assassination. There is a lot of history within the walls of this iconic space! Because it’s centrally located in downtown Indy, the hotel is a short drive away from The Children’s Museum of Indianapolis and the Indianapolis Zoo. It is within walking distance to Lucas Oil Stadium and Banker’s Life Fieldhouse. There is lots to do inside the hotel and out!

Sleeping in a real train hotel room was such a fun and unique experience for my family — one that we’ll never forget! It’s just the ticket for train enthusiasts of all ages.